Bettina Kattermann was an internal medicine physician involved in multiple foreign deployments. The scholarship for medical students from Myanmar was established to continue her humanitarian cause of helping people in Asia to help themselves.

My sister was passionate about music as a teenager, but decided to study medicine after graduating from high school. During her studies she discovered her fascination for distant countries and in the following decades she travelled to India, China, Russia and Latin America, some of them for several months. Against this background, her commitment as a doctor abroad after completing her specialist training was only a logical consequence of her passion for travel. Assignments abroad as a doctor – partly for Médecins Sans Frontières, partly for free agency services – have taken her to Myanmar (Sittwe), Ukraine (Kiev), DR Congo (Kabalo), China (Shenyang), Yemen (Sana’a) and the Caribbean (Turks and Caicos Islands), among others.

Bettina had a great passion and talent for foreign languages. Most of the time she succeeded in acquiring language skills to the extent that she was able to speak directly with her patients. In many ways my sister showed herself very seriously devoted to what she was undertaking. She herself knew deep pain and suffering from her own experience and was therefore able to take the distress of her patients very seriously. She enjoyed working in a team and was appreciated for her unpretentious and cooperative manner. She also gladly showed her dry and ironic humor.

She found it particularly gratifying to work for Doctors Without Borders in Sittwe (Myanmar) from 1998 to 2001. Here she organized malaria prevention and control. The field research trips, which also included the distribution of mosquito nets, took her to remote villages, sometimes by boat on the river network. Such adventures suited her very much.

My sister appreciated the gentle and polite nature of many people from Myanmar – something that was very much in keeping with her reserved, humble and smart nature. At the same time, she critically observed the political situation in Myanmar and was concerned about the incipient inter-religious tensions and the persecution of the Rohingya in Sittwe. Not a believer herself, she had a high respect for the spiritual roots of others.
Bettina was often irritated by the enormous gap between the highly developed medical care in Germany and the meagre working conditions in Myanmar. Using her legacy to support medical students from Myanmar is certainly in her spirit.

“I want to use my medical knowledge not only to promote health care for the people of my country, but also to advocate for sick people around the world.” 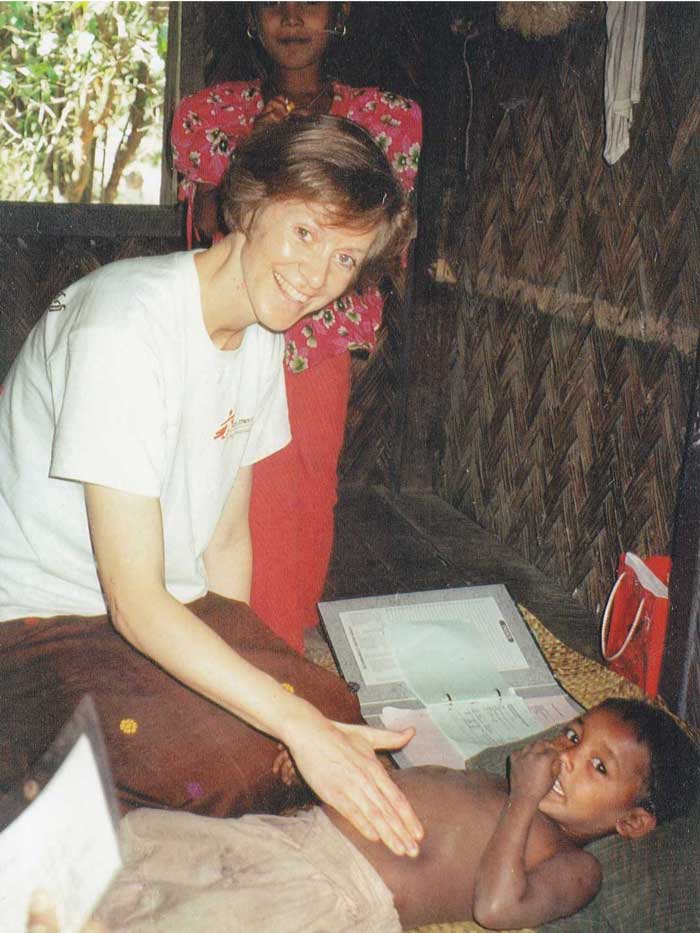